It's his first balls busting session I start with a crop to.rturing his balls lightly and then I kick and knee his balls with my knees and my high shiny boots.During the session I make him tell me between 1 and 10 how high the pain is, to be able to reach to his maximum capacity of tolerance. Audio in Spanish with English subtitles 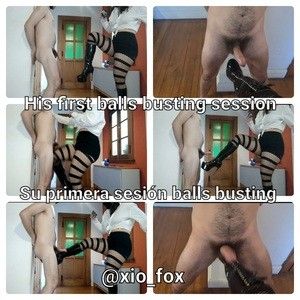 Imagine this strawberry represents your useless ugly balls!! Do you now how joyful it is for me to crush your testicles with the soles of my boots? Or even better , i just step on your balls with my heels and use my entire weight to make your balls burst. Oh yess, i will definitely castrate you loser!

Imagine this strawberry represents your useless ugly balls!! Do you now how joyful it is for me to crush your testicles with the soles of my boots? Or even better , i just step on your balls with my heels and use my entire weight to make your balls burst. Oh yess, i will definitely castrate you loser!

This is our very first cock crushing video with the beautiful Sandrine, one of our most talented girls who you'll be talking about a lot in the future. She has a lovely, innocent face but a very sadistic attitude. In this great video, full of very hard cock and ball trampling action she shows off all her great qualities.

The beautiful Annabelle, one of our most popular and experienced trample girls, makes her very first ball busting clip. This results in a real as her ity surprises us all. From the very beginning she looks completely pissed off and totally out of her mind as she kicks Cucciolo 's balls with unbelievable severity. He falls on the floor a few times in extreme pain under the constant barrage but still doesn 't get a break as she then stamps on his balls instead. She shows absolutely no mercy for him and his suffering during the whole clip, we have rarely seen sadism and cruelty at these levels.

My slave had to endure another ballbusting session. This time I wore pink winterboots. It was the second time he got ballbusted. First he got some kicks standing in front of me. After a couple of kicks got to the floor and I continued there and stepped on his hands and food. See my smile and hear me laugh while my slave is whimpering 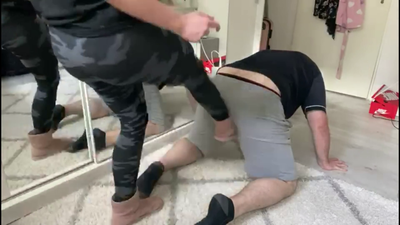 How I love electric torture... I only push one little button and the whole body of the slave starts to cramp and pull together. Experience a Forest Session with me and my little slave pig! With handcuffs tied up to a tree he is completely helpless to my sadism with electricity and ballbusting. Now after 10 weeks wearing a chastity belt he finally had the opportunity to wank, but then he doesnÂt gets his shit together. tztztzt 😂😂😂😉

154639 - Cock and ball torture under high heeel boots and sandals

i dont really give this guy a break... i go right after his useles little package stepping on, stomping and heel stabbing his cock and balls both... fun times!

Somehow, for completely mysterious reasons horse ointment has gotten on the whole varnish of my overknees... But what do you have a bootjack and his corresponding rag for? And no, this time I do not mean the rag in your ugly fuckface :D

When I had My lovely friend Miss Bat come visit Me at My dungeon, I decided to reward one of My boys that had been working hard for Me recently, cleaning & organizing the dungeon. he likes ballbusting, but he had never had a double ballbust before.... so We decided to give him his first! he was excited and nervous, but the fucking wimp could barely handle it! he was flinching and squirming the entire time while We kicked his nuts in - guess he was in for a little more than he bargained for, asking for a double ballbusting from two cruel Mistresses!

What happens when a slave stands naked in front of me and my friend Reell? Right ... The answer comes in the form of kicks and punches! The pitiful slave testicles get a very special rubdown from both of us boss ladies!

Super cruel ballbusting with me and my cutee girl Courtney. We torture this loser just for fun, kicking him in the balls without any mercy. This guy is just waste of space and he does not deserve any better. Every kick will render his balls even more pointless and the loser can squeel as hard as it wants... he wont escape...He will have to endure the full force kicks to his useless balls. Fuck you, loser...haha

Watch me busting this losers balls with my awesome combat boots. I kick his balls without any mercy, humiliating him and spitting on him. Maybe one of the best ballbusting clips you can find on this page.

I do not tolerate any complaining. This loser is down to my boots. I just step on his worthless cock and balls.I show him that I make the decisions here. The heels of these boots are really sharp which made this clip even more fun for me to make. I scratch his penis with my heels which really seems to hurt him. HAHA. I love hearing this loser moan in pain beneath me. Seeing his manhood turn red and blue and seeing him suffer is such a turn on, I just laugh and tell him to be quiet, he will know when IÂm done. Screaming louder may make me stomp harder. This might have been the first time that this loser's cock got so much attention. LOL.

Dont miss Part 1 and Part 2 In part 1 of this mud boots trilogy my slave had to lick my boots clean. Obviously he didnt do a got job at it so i use his pathetic balls and cock to rub all the dirt and mud off my soles. I also enjoy kicking his genitals and give him a little cbt.

Once more I am abusing my slave's dick and balls :) I started out by tying them up, applying clothespins and binder clips, adding some rubber bands for good measure and then poking him with a toothpick. Once I released him I started dripping hot wax onto his balls and massaging his dick with my boots.

Once more I am abusing my slave's dick and balls :) I started out by tying them up, applying clothespins and binder clips, adding some rubber bands for good measure and then poking him with a toothpick. Once I released him I started dripping hot wax onto his balls and massaging his dick with my boots.

Feel the pain with five different pairs of sexy shoes and boots. Go ahead and punch yourself in your stupid cock to simulate the feel of my heels and sharp toes kicking and grinding your soft flesh.

Herrin Samira and Lady Marina are kicking the balls of a slave very hard in Plateau-Boots, a myterium for the slave till he can't stand and speak any more!But the lady's don't stop , laugh about him and go on with there ballbusting ! 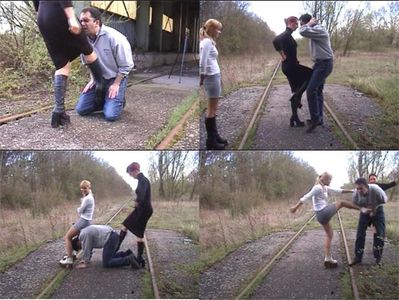 When I'm in a bad mood I order my slave to get here to torture him a little bit. That always means a lot of fun to me. First I kick his balls then he gets trampled under my old boots. ps: enjoy my sexy fishnets :)

These two super hot girls are out to completely ruin his privates! Megan holds his arms back for Xana to take perfect aim & she slams her sharp pointy toe stiletto boot into his nuts super hard over & over again until he falls to the floor helpless at her beautiful feet. Both goddesses kick, knee & stomp his jewels into mush! Joe is lying on the floor & Megan stands on his groin full weight with both feet digging her sharp stiletto heel in his nuts. Then it's Xana's turn! Xana steps up on to his crotch & has her heel right in his jewels full weight & bounces up & down. Check out the way Megan is jumping up & down on his balls while Xana smothers his face with her sweaty smelly boots! "Eww I popped one there!" - Megan says after feeling one of his nuts give way under her sexy sock toes. "Sniff these dirty socks!" - Xana yells at him while smothering his face with her stinky sock foot. These girls are so hot & so brutal! There not done with him yet either. They'll ruin his cock & balls yet before this series is done! 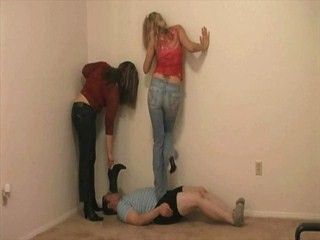 i kick this boys balls very very very hard, trample over his body and balls. im jumping up and down on his head and i stand on his face and stuff like that......